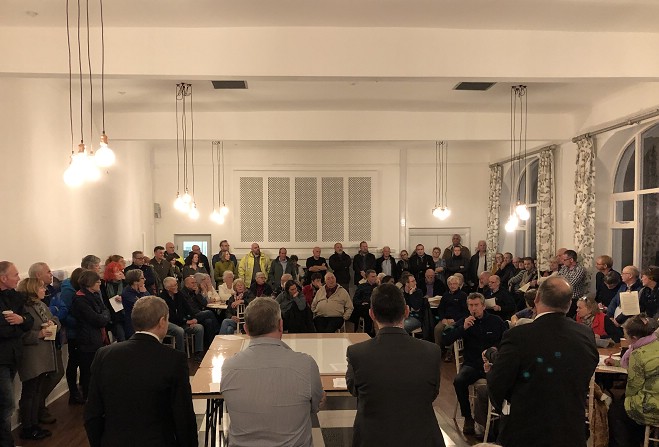 Officers from the Department of Infrastructure faced the Laxey public last night (19 Nov) and were grilled on proposals for sea defences in the village.

The plans, which include a 4ft promenade wall, a harbour wall and flood gates, are designed to protect against rising sea levels, but have so far proved divisive.

A budget of £1-2 million has been set aside for the project, which is hoped to offer protection for roads and homes for a century.

Around 100 people were at a public meeting held in Laxey Pavilion yesterday to make their views known on the proposals.

Director of Highways Jeff Robinson, flanked by two other offices involved in the designs, answered questions from the floor.

Some residents were concerned the scheme was an 'all or nothing plan', others wanted a temporary solution presented, whilst some questions whether the defences would even work.

Other issues raised included disability access along the proposed promenade wall, and the threat of river flooding undermining the sea defences.

Mr Robinson said it would be possible to support elements of the plan, such as a harbour wall on Tent Road, and turn down other parts of the scheme.

He told those gathered that ultimately the community will decided whether the plans progress , and nothing will be forced upon Laxey.

This view was echoed by MLC Kate Lord-Brennan, a political member in the Department of Infrastructure (DOI).

The Garff MHKs who called the meeting, Martyn Perkins and Daphne Caine, asked the audience to make clear what their priorities for the village were in respect of the plans.

Garff Commissioners will now be tasked with taking and collating the public's views before providing a response to the DOI.