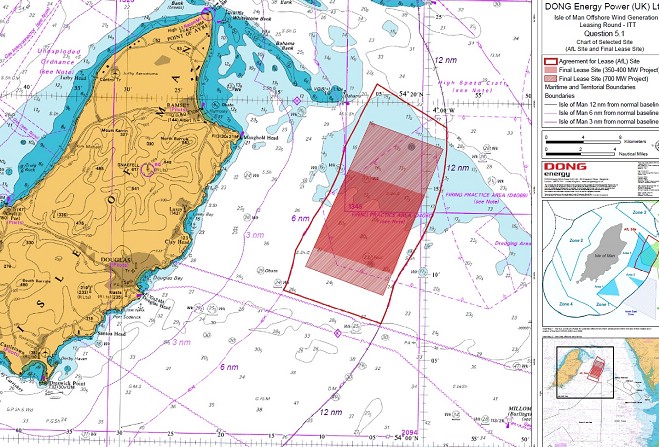 In a deal which could be worth £5 million a year to the Isle of Man, Dong Wind Energy has signed a lease agreement with the Manx government to assess an area of seabed off the east coast.

Today's move is a significant but early step forward in the project, with extensive consultation and environmental surveys still to come. The impact of a wind farm on ferry routes and fishing grounds will have also be taken into account.

However if the site is suitable, Dong could erect 100 turbines between six and 12 miles off the eastern coast from opposite  Ramsey to north of Laxey, inside the Island's territorial limit. At present it's not known how high the structures will be.

Dong has committed to carrying out a number of surveys of the sea bed to see if it is satisfactory for planting turbines. The firm's plans for a massive wind farm off the south coast of the Island the Celtic Array, was abandoned due to the condition of the sea floor in that area.

If plans are progressed, wind turbines could be turning by the early 2020's. Before then, Dong will have to negotiate successfully through extensive consultation with the Manx public and conduct  environmental studies