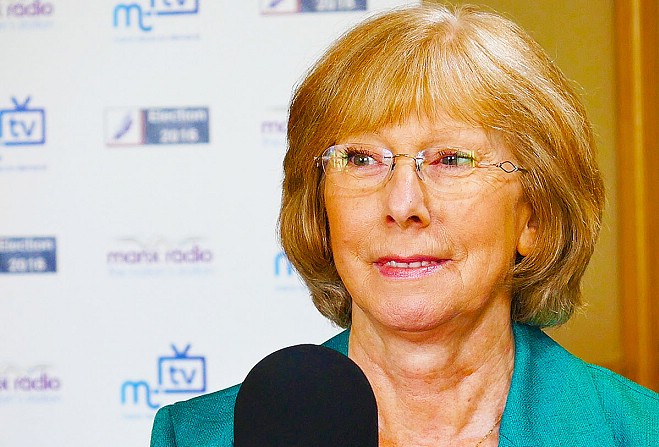 Douglas South MHK Kate Costain, who previously went by Beecroft, has stepped down.

The news was revealed in an open letter, distributed this evening.

Kathleen Joan Costain was elected to the House of Keys in 2011 to represent Douglas South, having stood unsuccessfully for Middle in 2006 and Douglas East in 2010.

Having been re-elected in 2016, she was made health and social care minister under the Quayle administration, before being "given a bunch of flowers" by the chief minister little over a year later.

In the open letter declaring her resignation, Miss Costain reflects on her sacking, and fires shots at Howard Quayle, as well as the Chief Secretary and other senior civil servants, past and present.

The top officers "wield more power than is rightfully theirs," she says, under a "weak" chief minister.

"My decision to stand down as an MHK was not an easy one to make," Miss Costain explains, pointing to long term health issues playing a big part in her decision.

Thanking her constituents, family and friends, Miss Costain continued that "it is now right that someone with more energy and vigour to bring to the post is chosen by the people of Douglas South."

That leaves the constituency with no MHKs, following the passing of Bill Malarkey and delayed by-election due to the Covid-19 pandemic.

You can read that letter in full here:

My decision to stand down as an MHK was not an easy one to make. Many people already know that I have had health issues for some time and it is now right that someone with more energy and vigour to bring to the post is chosen by the people of Douglas South.

I will be forever grateful to the constituents of Douglas South for their support over the years and would wish them to know that they have allowed me to have the amazing experience of representing them.

I would also like to thank my family and friends whose support has been invaluable.

I was the 13th female to be elected and some asked me if I thought it was an unlucky number. It may have been for some with whom I crossed swords, but it was a very lucky number for me.

My main reason for going into politics was to try to change the system by changing the budgetary process, changing collective responsibility and introducing a programme for government. I brought several Motions to Tynwald but made no progress under the previous regime. Collective responsibility was watered down (not enough but progress was made) before I became a Minister, the budgetary process is changing and we now have a programme for government albeit not in the format I had envisaged.

In our parliamentary system you are either a Minister, and therefore in Government, or a backbencher where your role is to scrutinise the actions of Government. I was lucky enough to hold both positions at varying times and enjoyed what each had to offer.

As a backbencher I would like to think that I will be remembered for the Sefton loan affair, stopping the back to work assessments being carried out by Dependability, stopping the Liverpool Care Pathway and of course, challenging the initial transfer of £50,000,000 to CinemaNX and the
subsequent actions. This finally resulted in a Public Accounts sub Committee being appointed by Tynwald to investigate matters. I am disappointed that I will not be in post for the conclusion of their findings but I will, of course, be following it closely.

In October 2016 a new Government was formed and I held the position of Minister of Health and Social Care for just over a year and until the now widely known “bunch of flowers” was given to me by the Chief Minister, Howard Quayle. Maybe now that I am no longer an MHK he will do me the
courtesy of telling me what I did wrong but I am not holding my breath waiting for that. It was very hard work but it didn’t feel like it because I enjoyed it so much. Even though much of what I wanted to put in place to improve various situations was only in the pipeline when I was sacked, I do feel
that the things that I managed to implement, despite the opposition of the then Chief Executive, has made a difference to people’s lives. When I was sacked I had, among other things, introduced a 24/7 stroke thrombolysis service, diabetic retinopathy, consolidation of endoscopy services and actioning items of serious patient safety that had been on the risk register for far too long. The achievement which I believe will have the most significance, will be the appointment of an independent health regulator, which I made sure was in the programme for government and the
legislative programme.

During my nine years as an MHK I found that 99% of civil servants are excellent at their jobs, are well motivated and hard working. Unfortunately, in my experience, it is the Chief Secretary and his Chief Officers Group that wield more power than is rightfully theirs.

I can do no better than to quote what I said in Hansard at the end of my speech in Tynwald in May
last year:

“This is about the current system which allows senior civil servants to break the Government Code without consequence. It allows Chief Executives to thwart their Minister, not comply with Ministerial instruction and to give little or no support to their Minister or departmental members.

This is a system where the civil servants can wield power with no come back whatsoever if they have the support of the Chief Secretary.

It is a system where speaking out about such things by politicians is absolutely discouraged.

A system that allows these behaviours is not a system that works for the benefit of the people.

Are we a nation that is, in reality, ruled by civil servants when there is a weak Chief Minister at the helm? Sadly, my experience has shown this to be the case.

I hope that some aspiring politicians will take note and continue to try to change the system that, in my opinion, is not allowing our Island to achieve what it is capable of.