End of an era for two Ramsey churches 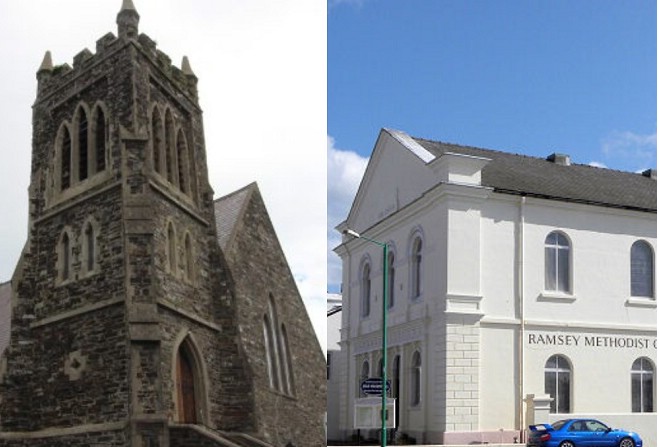 Two congregations to continue meeting at a new home

It's the end of an era for two churches in Ramsey, with the congregations joining to share services at a new home.

The Waterloo Road Methodist building has been sold, whilst nearby Trinity United Reformed Church is up for sale.

The high cost of maintaining these places of worship - built in 1845 and 1885, respectively - had become financially unsustainable according to members of both churches.

Over the next two weeks, the final regular services will be held, one in Trinity at 10:30am this coming Sunday (19 May), and the following Sunday, also at 10:30am, the final Methodist Church service (26 May).

Andrew Cole, secretary at Trinity, says with an elderly, shrinking congregation, and the changing nature of the church's outreach work, it was time to move on to an 'exciting new chapter'.

Similar factors influenced the sale of the Methodist church according to Alan Gelling, with difficulties over funding and attendance.

"When our church was built, its maximum capacity was 1,050 people,  with regular attendance of around 500. Now, combined with Trinity, congregations are around 50 people."

The Methodist and Congregationalist-Presbyterian groups have recognised their similar situations, and have been sharing services at St Paul's Hall for several years.

Aline Cannell, a long-time member of Trinity Church, says although there's a 'sadness' in leaving the building, both congregations feel their joint services have been 'so positive'.

The two groups will now continue to hold services together, with the potential to establish a formal, legal connection, known as a 'local ecumenical project'.

Mr Cole believes this could provide a template for other faith groups across the Island who faced the same issue as these two churches.