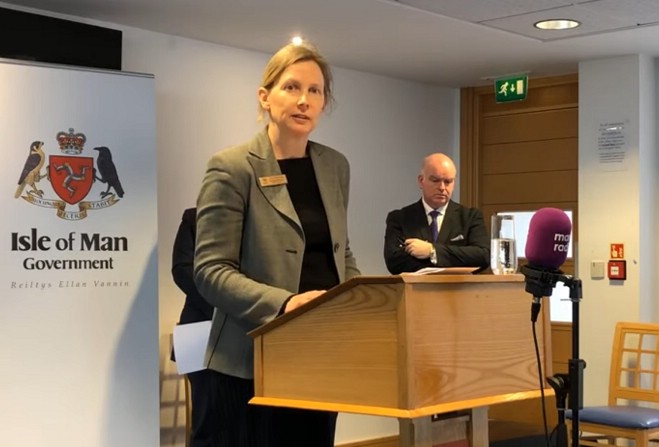 The Island's most senior doctor says the former CEO of the health department blamed her for the delay to the vaccine rollout in December 2020.

Dr Rosalind Ranson has been outlining events that led up to the first Covid-19 jabs being administered on Island at her employment tribunal.

The Department of Health and Social Care had hoped to begin the rollout before Christmas 2020, but had to push back the start until 4 January after Dr Ranson refused to sign the necessary paperwork.

The DHSC medical director claims then-chief executive Kathryn Magson insisted she wasn't allowed to take part in meetings about the vaccine rollout - something Ms Magson disputes in her written statement.

However, Dr Ranson says it later became apparent that, as medical director, she was legally required to sign off a document, permitting the rollout to go ahead.

She told the hearing she only became involved in the preparations for the rollout on 18 December, just three days before the department had hoped to administer the first injections, and that paperwork wasn't ready.

The PGD - or patient group directions - presented to Dr Ranson had been adapted from the wording used by Public Health England, but she's raised concerns that the changes invalidated the indemnity.

She claims Ms Magson and other members of the vaccine group weren't aware of the emergency regulations used to authorise the vaccine, and why it was so crucial to have the indemnity in place.

An extract from Ms Magson's statement revealed that she had described Dr Ranson's behaviour at a meeting to discuss the PGD as unprofessional, but later apologised to the medical director in an email.

However, Dr Ranson says Ms Magson humiliated her in front of members of the vaccine group at a meeting which she was asked to attend at short notice.

She added that while there were issues with the PGD, she also found that consent forms and other paperwork were also not ready, and said the programme was far from ready to be safely delivered.

She told the tribunal that while she had a duty to the department, her first duty was to the public and safety.

Dr Ranson says she was then placed in charge of completing the documents, forcing her to cancel study leave and time off, and that the blame for the rollout not starting before Christmas was placed at her door.

Emails from Ms Magson showed that she was concerned about the impact the delay would have on public confidence, adding that the media had become suspicious, questioning why the Island hadn't started the rollout like other areas of the British Isles.

Dr Ranson alleges that she was unfairly dismissed from her role as medical director, something the DHSC denies.