Hickman dominates Senior TT for fourth win of the week 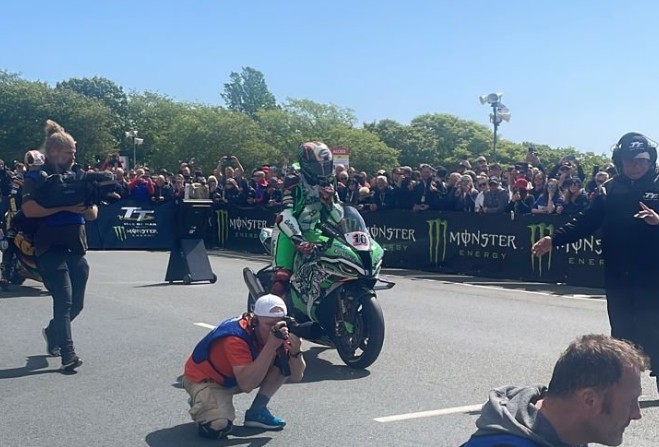 Peter Hickman on the startline at the 2022 Senior TT

Lap record holder joined on podium by Harrison and Cummins

Peter Hickman is the 2022 Senior TT race winner after a dominant performance in the six-lap contest.

The Gas Monkey Garage by FHO Racing rider wrapped up his fourth win of the week and ninth TT win of his career, with Dean Harrison in second and Manxman Conor Cummins completing the podium in third.

Harrison led at the first timecheck at Glen Helen on the opening lap, but it was Hickman who had the advantage by Ballaugh, growing his advantage to 8.36s by the end of lap 1.

There was a close contest between the two Milenco by Padgetts riders in the early stages as Davey Todd sat in the final podium place before Cummins moved ahead by Ramsey, opening up a 2.85s gap over Todd.

Hickman continued to extend the lead on lap 2, coming in for his first pitstop 14.619s ahead of Harrison, but the DAO Racing team were quicker in the pitlane, with the gap cut to 10.4 seconds by Glen Helen on lap 3.

Harrison also appeared to have picked up damage in the opening couple of laps, with his bike having a cracked screen for the final four laps.

There were issues in the pitlane for James Hillier, who missed his pit box, while Michael Rutter was stationary for more than two minutes while his bike was serviced, and John McGuinness picked up a 30-second penalty for speeding in the pitlane.

Pitstop time - It's all action in gasoline alley!
James Hiller overshoots and John McGuinness gets a timing penalty for speeding. #iom #iomtt pic.twitter.com/wDxveqcS6V

Cummins continued to hold third place by just over a second at the end of the second lap, but Todd made up time in the pits to move back ahead of his teammate at Glen Helen.

Despite the slower pitstop, Hickman's lead had grown at the end of lap 3, as he headed into the second half of the race with a 18.685 advantage over Harrison.

The wind caused an issue for some riders, with Mark Parrett pulling in at the end of the first lap after struggling with the conditions, before Rutter called it quits after lap 3.

At the second round of pitstops, Hickman had a 19.34s lead, but Harrison's crew were faster again in the pitlane, with the 2019 Senior TT winner getting the gap down to 13.9s at Glen Helen on lap 5.

In the battle between the Padgetts riders, Cummins put in his second fastest lap of the race on lap 4 to increase his lead over Todd to 2.726s, increasing to 4.4s at the first checkpoint on lap 5.

Having broken the newcomer lap record in the Superbike race a week ago, Glenn Irwin appeared to be on for another impressive performance at his debut TT, having sat in 10th place at the end of lap 4, but the Honda rider retired from the race in the pits.

First TT ✅ Fastest ever newcomer ✅
Very disappointing to have to retire on lap 4 lapping 128.2 with a problem the last few miles and slowing into the pits to retire. I was up to P10 and closing the gap to P8.
However the most important thing is we think of the families 1/2

Hickman re-established the gap over Harrison going into the final lap, but Harrison continued to charge at the start of lap 6, reducing the lead to 12.3s at Ballaugh.

The lap record holder looked relaxed as he headed over the Mountain Road for the final time, waving to the crowd at the Hairpin as he pulled away from Harrison, crossing the finish line 16.918s ahead of Harrison.

After the race, he spoke to Radio TT's Chris Kinley:

It's the second time Hickman has won the Senior TT, adding to his previous victory in 2018, and he also broke the TT speed record in the process, clocking 199.786mph on the Sulby Straight.

As well as the damage to his screen early in the race, Harrison revealed after the race that he also suffered a second bird strike on lap five which damaged his faring:

Todd looked like he could take third away from Cummins as he closed the gap to 0.1s on the final lap, but the Ramsey man put in a strong performance over the second half of the lap to come home 2.827s ahead of his teammate.

Cummins spoke to Chris Kinley about the contest for third:

Manxman Nathan Harrison, competing at TT for the first time, completed the top 10, lapping at 128.087mph on the final lap of the race.

With the race held over from Friday, there was a last-minute appeal for marshals to ensure the contest could go ahead. After crossing the finish line, Harrison paid tribute to the Orange Army: