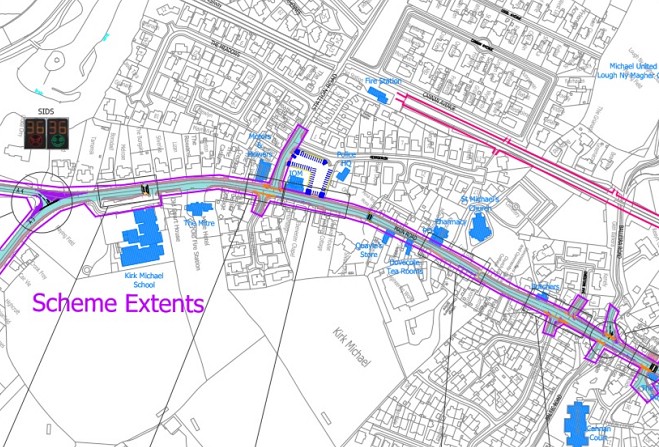 A series of traffic calming measures have been proposed by the Department of Infrastructure to slow cars through Kirk Michael.

Some residents say they feel unsafe due to speeding vehicles, and the narrow layout of the existing road.

More than fifty people attended a public meeting recently to find out more about the proposed safety measures.

Designers have also included raised removable zebra crossings by the school and the Tack Box shop, smiley SID signs, and a raised 'informal' crossing by the garage.

New buffer zones have been created, with 'visual narrowing' and a refreshed carriageway line.

The DoI also wants to put a cycle stand and electric vehicle charging points in the Isle of Man Bank car park.

Several ideas which weren't so popular with residents have been removed, such as speed-bumps, a roundabout at Douglas Road corner, loss of parking, and coloured tarmac.

Michael Commissioners back the DoI's plans, and feel they'll help create a greater sense of community by allowing pedestrians to move safely around the village.

It's understood the department will seek a contractor through a tender process in the next few months to undertake the work.