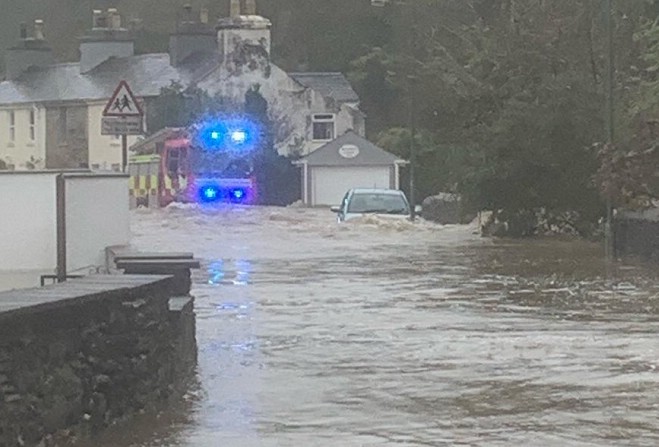 Several people have been rescued from flooded properties in Laxey this morning.

Police have declared a major incident in the village, where Glen Road between the upper and lower bridges has flooded severely.

Several vehicles have washed away and people have been trapped in at least three houses.

Earlier this morning fire and rescue teams reported a first group of elderly people had been brought to safety, and teams were going from house to house in what have been described as hazardous conditions.

Police tweeted at around 2.40pm to say Glen Road had been badly damaged:

Glen Road has suffered severe damage due to flooding with major damage to houses. Access for residents is a priority but we are not sure if the road will be able to be fully opened any time soon. #IOMPolice

A coastguard helicopter has been brought in to assist in the operation and landed on the football field in the area.

Around 10.45 this morning police reported that a further breach had caused flooding further down the river, but staff have checked all the elderly persons at Cooil Roy who are OK.

The BBC's Alex Bell was in Laxey earlier this morning:

Christ Church Laxey had been opened as an emergency centre by Civil Defence.

It's understood Manx Utilities had knocked a hole in the wall along Glen Road to allow a digger access to rebuild a weir, which has allowed a 'significant amount of water' to stream out.

That's according to Pete Burgess, the clerk to Garff Commissioners, who's been out helping Laxey residents during the torrential flooding.

He spoke about it during this interview with Local Democracy Reporter Ewan Gawne, but began by explaining how things were in the village:

Manx Utilities has confirmed to Manx Radio that was the case.

Power has been restored to one hundred and fifty properties in Glen Road Laxey, which had earlier had them turned off by Manx Utilities for safety reasons.

Emergency services say the assessment at this time is that residents on Glen Road Laxey are safer in their premises rather than trying to leave.

Any people who are trapped have been asked to go up stairs and monitor media.

Police say they're making efforts to speak to them all but if you want to check on residents in that area by phone please do so.

This video, filmed from a property on Glen Road, was posted on the ROK Landscaping Services Facebook page earlier:

Meanwhile, BBC Isle of Man's Alex Bell has shared this footage of the coastguard helicopter which is helping to evacuate people:

A Sea King helicopter assists with the flood evacuation in Laxey. pic.twitter.com/m3CB7Ojhfu