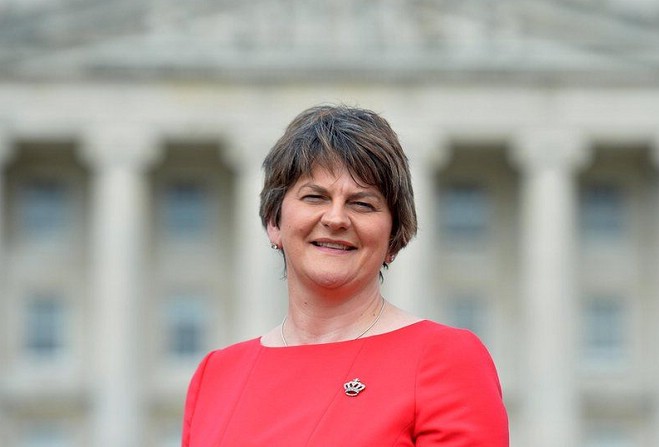 Arlene Foster resigned as leader of the Democratic Unionist Party (DUP) on Wednesday after plans to oust her gained momentum.

Mr Quayle called her a 'strong and principled leader through difficult times'.

However, the message was then branded 'extremely disappointing' and a 'bad political move' by Manx Labour.

Many members of the DUP moved against Mrs Foster due to her stance on Brexit, prompting her to step down after six years in Northern Ireland's top job.

The Manx chief minister tweeted shortly after the news: "Sending Arlene Foster my very best wishes as she steps down as @DUPleader.

"I have come to know Arlene through the British-Irish Council and she has become a good friend to the #IsleofMan.

"She has shown herself to be a strong and principled leader through difficult times."

"I don't know who needs to hear this but being strong and principled are actually bad traits if your principles are built around bigotry", Mr Hamer said.

He went on to suggest that Mr Quayle's comments may go down badly with her successor.

"This is not even a good political move for the Island... she [Mrs Foster] just got ousted by her own party so the incoming leaders won't be fans..."

On Thursday, Manx Labour leader Joney Faragher backed up the remarks, hitting out at the 'sickening' DUP.

She wrote: "Their stance on women's rights and their anti-gay stance is frankly sickening and has no place in modern society."

Devon Watson also joined in with criticism, hitting out at Mrs Foster's opposition to same-sex marriage.

The councillor said: "Extremely disappointed that the Chief Minister and the Isle of Man Government have endorsed a politician that has fought hard against gay marriage and reproductive freedom for women."

Mrs Foster became the first DUP leader to attend an LGBT event in 2018, where she said: " I believe I can hold my principle position particularly in regards to the definition of marriage whilst respecting diversity across our society."