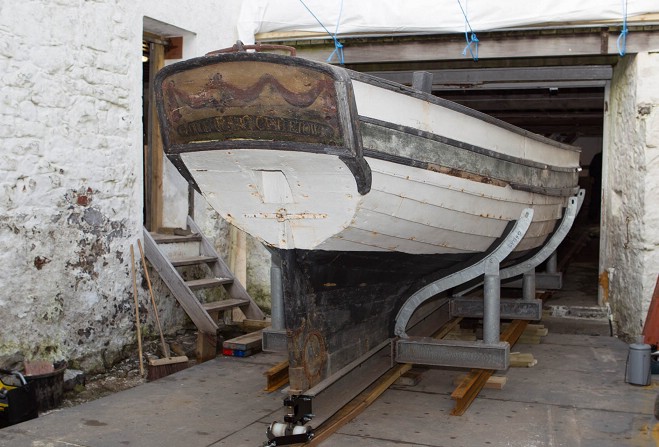 The outgoing director of Manx National Heritage has rejected criticism over failing to return a famous schooner to 'its rightful home'.

The 1792 Peggy was moved out of Castletown Nautical Museum to the Isle of Man Business Park for conservation purposes more than five years ago.

Some campaigners want to see it returned where it can then become a tourist attraction in the south of the Island.

Edmund Southworth, who retires next month, says the decision to keep the boat in Braddan is justified:

The armed yacht was built for prominent MHK and banker George Quayle in the 18th century and is often billed as the world's oldest schooner.

Campaigner Richard Bedford has hit out at MNH for not restoring the Peggy to where he feels it belongs.

"Nearly six years after the unique world famous 1792 Manx schooner, the Peggy, was taken away by MNH from her hiding place in her Castletown harbour side cellar for conservation to an industrial building in Braddan, they still have not arranged a display facility ready for her return to Castletown's Nautical Museum", he said.

Mr Bedford added: "The result being that she is having to remain locked away out of sight in Braddan instead of benefiting Castletown as a tourist attraction.

"[The Castletown Nautical Museum] is the only museum in the world without a boat."

However, Mr Southworth claims it was a risk keeping the boat in the south of the Island as it was being damaged.

He said: "I'd regard it as a success that we took the Peggy out of a basement which was getting washed by the tide.

"It was soul-destroying to see a museum exhibit at such a risk.

"The water was lapping up against it, salt water, causing corrosion in an 18th century boat.

"How appalling to keep a boat in those conditions."