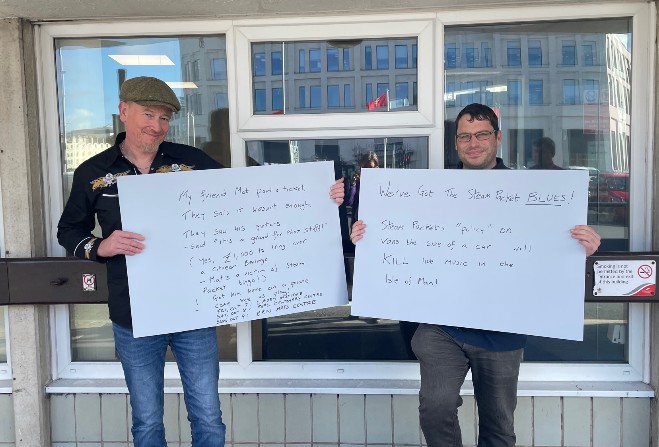 A music promoter on the Island has hit out at the Steam Packet saying its fares for travelling musicians are a threat to the industry.

John Gregory's complaint comes after blues musician, Howlin' Mat, was told he would need to pay an extra £1000 to bring his vehicle onto the Ben-my-Chree at Heysham.

The company said his Citroen Berlingo would be classed as a commercial vehicle - something Mat claims he wasn't made aware of when booking through a third-party site.

John Gregory says issues such as this threaten the Manx music scene:

Howlin' Mat, who'd only had an hours sleep after driving back to Yorkshire, leaving his gear behind and making for Liverpool airport, told Manx Radio it's been a unique experience:

‘The Isle of Man Steam Packet Company has supported dozens of artists to travel to and play in the Island so far this year, from individual blues musicians through to the Halle Orchestra.

‘Supporting arts and cultural events across the Island is core to the Company’s commitment to our community. The Company regularly works with a wide range of promoters and venues such as the Peel Centenary Centre, Erin Arts Centre, the Villa Marina and Gaiety Theatre, as well as schools and charities.

‘For us to help with such requests, we need to be approached ahead of time.

‘Unfortunately, in this case, we were unaware of the event and the ticket was booked through a third party. Our terms and conditions are clear about commercial vehicles and we have to apply them fairly to all customers.

‘It is for precisely this reason we have well-known support schemes in place for artists, promoters, sports and other worthy causes that add to the quality of Island life.’

Manx Radio spoke to John Gregory and Howlin' Mat as they protested outside the Sea Terminal in Douglas: