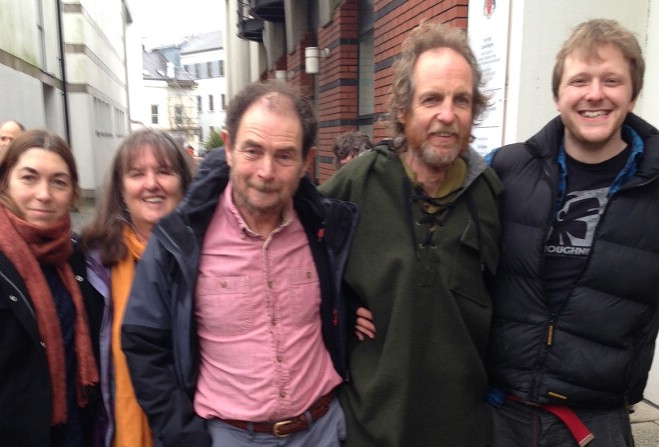 Daniel Richardson (second right) with some of his supporters

A man accused of trespass after building a cabin in Ramsey Forest has appeared in court for a pre-trial review this morning.

It was to establish the procedures leading up to the trial, which is scheduled for early April next year.

The issue has attracted a great deal of public interest.

It was standing room only in court, as Deemster John Needham explained to Daniel Richardson the steps he needed to take, after Mr Richardson said he would be defending the action.

The Department of Environment, Food and Agriculture, represented by advocate Kieron Murray, claim Mr Richardson's property encroaches upon the department's land, and he had no right to build there.

Mr Richardson was told he would have to produce a list of witnesses that he intended calling.

He was also also asked if he wished to produce a skeleton case for his defence.

When asked if mail would reach him, he told Mr Needham, 'The postman knows my address'.

He went on to add that he'll be defending his home: