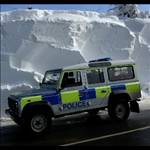 The Department of Infrastructure says it’s managed to reopenthe Peel Coast Road between  Douglas RoadCorner to Peel and the Switchback Road as well as Ballamodha from Mines Road toGate Road.

Drivers are being reminded to drive cautiously.

B35 Ballanhicholas to A24 Garth Crossroads

A27 between the Ballacallin and Roundtable

A36 Sloc from the Ballamodha.

A36 to its junction with B44 Linague

The Mountain Road between the Hairpin and Creg-ny-Baa.

B37 Clanna Road from its junction with Newtown to Stuggadhoocrossroads

Meanwhile, Manx National Heritage says a harbour on the Calf of Man has been seriously damaged by a storm over the weekend.

The damage happened at the entrance to South Harbour on the south east side of the Calf when boulders at the outer marker collapsed, blocking the harbour and making passage hazardous for vessels.

However, it’s asking visitors not to land their boats at South Harbour until further notice.