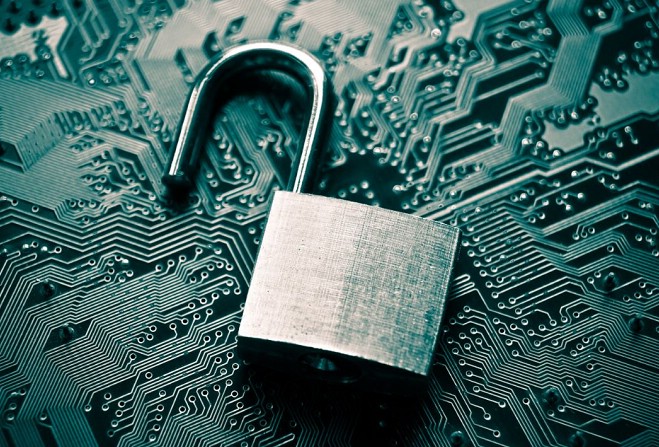 Government confirms EAG is not provided with personal information

The Manx Government says it will investigate if there are 'credible reports' that personal medical information has been shared inappropriately.

It's outlined its general position on the protection of private data saying only people with a 'legitimate need to know' are given access.

Manx Radio asked the government's communication service to provide a statement following a series of Tweets posted on the social media platform Twitter on Sunday (2 January).

Those postings – which centered on the Council of Minister's response to Covid-19 – came from the account of Dr Rachel Glover; the CEO of local company Taxa Genomics.

The scientist – who helped lead the Isle of Man's testing facility for Coronavirus at the start of the outbreak – now sits on the Emergency Advisory Group.

The EAG is a group set up by Tynwald to provide external advice, insight and perspective to CoMin and ultimately Tynwald in response to emergency situations like the pandemic.

The initial Tweet – sent just after 5pm on 2 January – read: "A message to the Isle of Man Government. If you are going to announce someone’s death then you should bloody well announce what they died of. Especially if it was a preventable pathogen such as COVID." 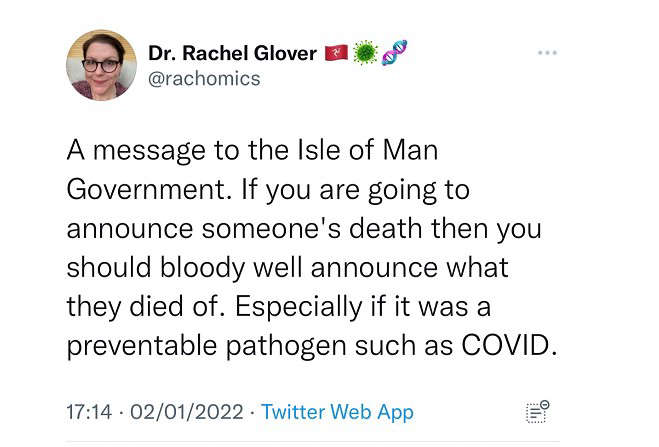 Subsequent tweets slam an, alleged, 'let it rip' policy which the poster claimed has 'consequences'.

After backlash from other social media users, around seemingly personal information being shared in a public domain, the individual posting on the @Rachomics account, posted: "I only have an inbox of message over the last week telling me who has been admitted for what." 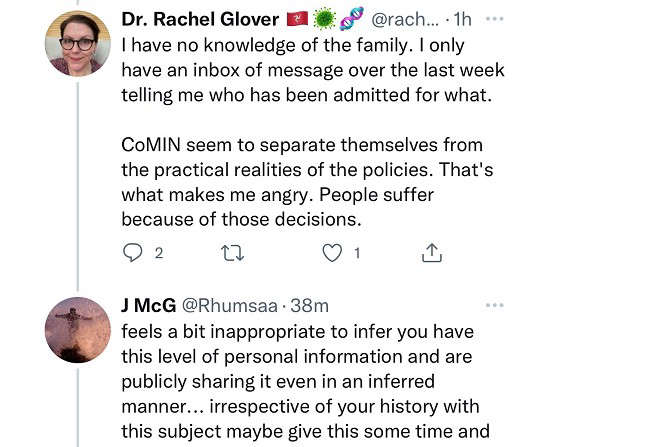 Following the exchange Manx Radio made repeated requests to the communications service to provide clarification on whether or not medical information was being shared.

A statement received this afternoon reads:

"If there were credible reports that personal medical information has been shared inappropriately then Government would of course investigate."


It's also confirmed the EAG, as a committee, has not been provided with personal medical information.

Executive director of external relations Peter Boxer asked Manx Radio to clarify that the statement was a 'general policy comment' and was not based 'on the events of the other night'.

In response she said: "As a scientist in a private company I don't have access to anyone’s medical information as you would expect.

"On Sunday night I was sent a screenshot through Facebook which I assumed was photoshopped and felt it was “the last straw” with the online abuse I receive and decided to delete the account.

"Later on Monday I discovered that it was actually a breach of my Apple iCloud account which had given someone access to my personal files and my saved passwords for numerous sites.

"It would appear that I'm paying the price for a malicious individual who has realised that one of my passwords was available in the public domain and used it to parody me using my own Twitter account.

"I wasn't aware of the password breach until this happened and would encourage everyone to check whether their passwords may be available online and make each password unique.

"I'm still in the process of figuring out the extent of any access to my personal files and devices and have spent much of the last 24 hours securing my accounts, changing passwords and securing my financial information."