Return of 'The Chronicles'? 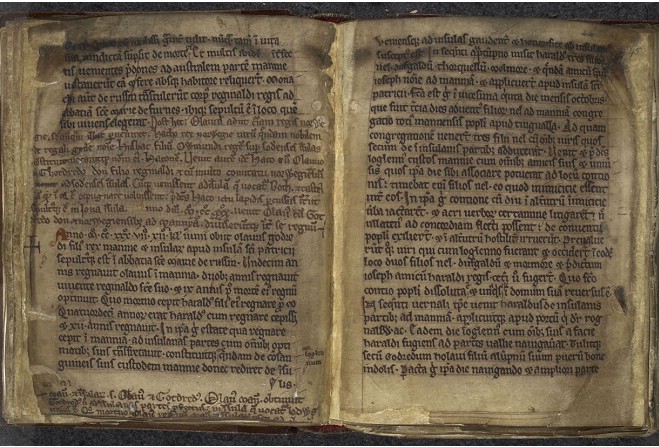 The latin document contains notes on significant events on the Island from 1000 A.D. to 1316 A.D

A medieval manuscript penned by the monks of Rushen Abbey has been in the possession of the British Government for more than 300 years. It is a contemporaneous account of the Kings and Bishops of Mann, widely considered to be the most important document of Manx history to the Isle of Man.

Following a supplementary question in Key's this week, Jason Moorhouse MHK asked if Manx National Heritage was considering a return of The Chronicles of Mann.

In doing so, it prompted one senior politician to reopen the discussion surrounding the rightful, permanent place for the 13th century document.

Bill Henderson MLC, a longstanding supporter of Manx heritage, is grateful for the Arbory, Castletown and Malew member for raising the matter of 'The Chronicles'.

'The significance of these original parchments to the Island are priceless. It ostensibly refers to all things Isle of Man and it must be one of, if [not] the only, that does so.'

How it came to be in the possession of the British he says, will remain buried in the midsts of time.

'There was a couple of notable English gentlemen in the 1700s who seemed to have come into ownership, or have The Chronicles in a bound volume with other items in their own personal book collections.'

In 2007, Mr Henderson then MHK for Douglas North, successfully carried a motion in Tynwald obliging the government to not only recognise the manuscript as 'a document pertaining solely to the Island', but to ultimately secure 'The Chronicles' returned to the Isle of Man.

The court voted unanimously in favour and Tony Brown's administration was tasked with beginning negotiations with the relevant British authorities.

However, Mr Henderson said it wouldn't be as simple as asking for the document back.

'I wrote to the British Home Office in the early 2000s regarding the document and had the legal picture spelt out to me. It showed you the problems surrounding it and it's very much a case of working through legal channels.'

Despite government efforts, Chief Minister Tony Brown reported to Tynwald in 2008 and revealed the outcome of his approaches were unsuccessful. The Ministry of Justice in the UK dismissed the consideration for 'The Chronicles' to be given to the Island for permanent display as it was vested in the British Library.

The Ministry explained how the Library was an independent body, which was therefore forbidden by the British Library Act 1972 to dispose of any items in its collection.

Currently, the 13th century manuscript is on display in the St. Pancras Treasures Gallery in London.

Although the possibility of an indefinite loan is said to be unlikely from the Library, the document has been exhibited on the Island before. The Manx Museum had it on display from June to December 2007 and, most recently, from October 2012 to March 2013.

Over a decade on from his motion, Mr Henderson remains keen to open talks with the now Council of Ministers and will write to the Chief Minister, to gauge if the political will is there to mount another round of discussions.

From a nationalist's point of view, or perhaps with his Celtic League hat on, Mr Henderson believes the Manx claim is far greater than the British.

'As far as I'm concerned, they should be on display, permanently at the Manx Museum, Kingswood Grove, Douglas.'

According to the Museum any future loan would require very careful planning.

'It is highly unlikely the British Library would ever agree to their permanent return to the island, although temporary return may be possible in future, should a suitable opportunity exist.'