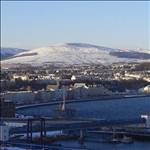 As the Island remains in the grip of freezing conditions, following unexpected snowfalls from around 7am today, police are continuing to advise people to stay at home.

They say travel should only be considered if the journey is absolutely necessary and, in the difficult conditions, emergency services will only be able to deal with absolute emergencies.

Schools around the Island, including the Isle of Man College, King William's College and the Buchan, stayed closed on what would have been the first day back after the Christmas and New Year holiday.

And in the middle of the afternoon a decision was taken not to run any bus services today, with an announcement on tomorrow's schedule due to be made at 6.30am.

Richmond Hill was open, but anybody using the route was advised to do so with extreme care.

There will be no mail deliveries and no bin collections today and the northern and eastern civic amenity sites are shut.

The Manx Blind Welfare Society, the Manx Foundation for the Physically Disabled and Age Concern say their services are severely limited and the All Day Unit at Hospice is closed today.

Anybody travelling from the Island by air is advised to contact their airline for information about today's services. There has been snow at airports in the United Kingdom, including Leeds/Bradford, Liverpool and Manchester, which has led to delays and cancellations.

All outpatient clinics at Noble's Hospital, apart from the Breast Clinic, have been cancelled for today and there has been no patient transfer service because of the poor road conditions.

The ambulance service is said to be under considerable pressure, especially in respect of calls to outlying areas, and is only dealing with urgent and emergency calls.

Some theatre lists have had to be postponed due to a lack of staff and in some cases patients haven't been able to get to the hospital.

Members of the public are advised to ring Noble's Hospital on 650000 for further information.

At Ramsey Cottage Hospital, all outpatient clinics are cancelled, including the Minor Operation Clinic.

The rest of Ramsey Hospital is open, the safest access being via the Bride Ward.

The main telephone contact number for Ramsey and District Cottage Hospital is 811811.

There has been no Meals on Wheels service today, but relatives of elderly people affected have been alerted. Those in desperate need of food can ring a helpline number, 687308.

The National Sports Centre in Douglas closed at 4pm today, as did all the Isle of Man Government's public counters.