Runway extension issues to be raised in Keys 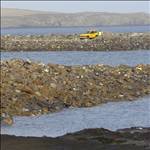 The runway extension at Ronaldsway and public sector pensions will be among the issues discussed during a busy question time in the House of Keys next week.

Onchan MHK Peter Karran has a number of questions relating to the promontory which is under construction at the airport.

There will also be further consideration of the collapsed Kaupthing bank.

Mr Karran will ask the chief minister whether there are plans to tell new government employees, taken on after April 1st, that current pension arrangements will no longer apply.

He also has five questions on the runway extension, including whether environmental issues are being taken into account by government, and whether material being dredged from the Mersey, for use in the project, could be contaminated.

Rushen MHK Juan Watterson will ask how much the Treasury has paid Kaupthing bank for its services since the collapse in October, North Douglas MHK Bill Henderson wants to know if the Island will be trialling a version of the UK's anti-paedophile 'Sarah's Law' and a question will be put to MEA chairman Quintin Gill about a remark he made on Manx Radio recently about wind and tidal energy.

Question time is due to start shortly after 10am and there will be live coverage on Manx Radio's AM 1368 service.

Meanwhile, Eddie Lowey, MLC, has tabled a number of questions for Tuesday's sitting of the Legislative Council.

He will ask whether the Manx government's Information Systems Division has obtained value for money from a particular contract, and what steps are being taken to control expenditure by the Platinum Group, which is involved in running this year's TT.

Mr Lowey also has a question about what he calls the "Carnival of cars, vans and flags", which many people will have seen in a field at the Blackboards, between the Fairy Bridge and Ballasalla.

He wants to know if it's "a blatant attempt to circumvent the prohibition of advertising in the countryside".

The sitting will start at 10.30am on Tuesday.