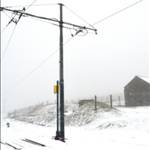 Some Island homes remain without power while a number of main roads have been closed as parts of the Island get to grips with wintry weather.

Heavy snowfall and the prediction of further snow led to Island schools being closed at 1pm.

A limited bus service has resumed, though. Routes 1 and 2 will only travel as far at the Manx Arms in Onchan, then detour via Royal Avenue, the promenade and Lord Street, as will routes 11 and 12. Routes 5 and 6 will run on the main roads from Douglas to Peel and back only, terminating at QEII. Route 3 will run as normal, via the Grandstand.

Large numbers of households in the west and north of the Island are without electricity, although power has been restored to another 100 homes.

The MEA says it's due to a combination of snow, ice on power lines, high winds and trees blown down.

Access issues have hindered engineers' efforts to restore supply to homes north of Peel through to Kirk Michael, including Cronk-y-Voddy, and in the North West Curraghs area. The MEA says it is extremely unlikely it will be able to restore these remaining supplies before tomorrow.

The MEA's Alison Cottier says teams of engineers are out trying to restore supplies but are working in extreme conditions: (play audio clip)

If you are experiencing difficulties, the MEA line is 687687.

The following roads are closed:

The Isle of Man Bank Ballasalla and Laxey branches have closed for the day; Lloyds TSB branches in Ramsey and Castletown are shut while the Victory House Douglas branch will close at 4pm.

All post offices around the Island closed at 3pm and there’ll be no mail collections this afternoon.

Manx National Heritage attractions have also closed for the day.