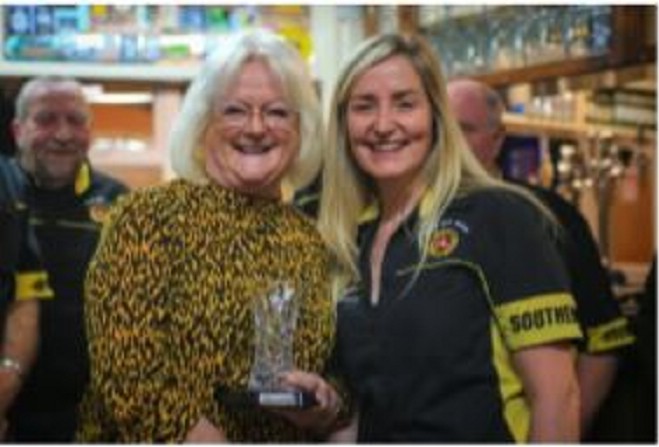 A longstanding supporter of the Southern 100 has been recognised for her fundraising efforts.

Tricia Clague was presented with an engraved crystal vase by Club Secretary Rachel Palmer at a recent event held at the Old Market pub in Douglas.

At the gathering, Tricia had also presented her latest cheque, for £650, taking the total she has raised to more then £10,000.

In addition to the fundraising, Tricia has spent the last 20 years looking after hospitality at race control.

Club President Phil Taubman thanked Tricia, saying: "You never fail to surprise us with your donations each year raised with much effort on our behalf and the Supporters Cub is extremely grateful to you."

Thanking everyone, Tricia said: "This means so much to me, the Southern 100 meant so much to Gordon and he asked me to keep being involved after he died and I am keeping his wish alive especially when I am at Race Control, which was where he was based with the Start Procedure and the all-important Finishing Flag."