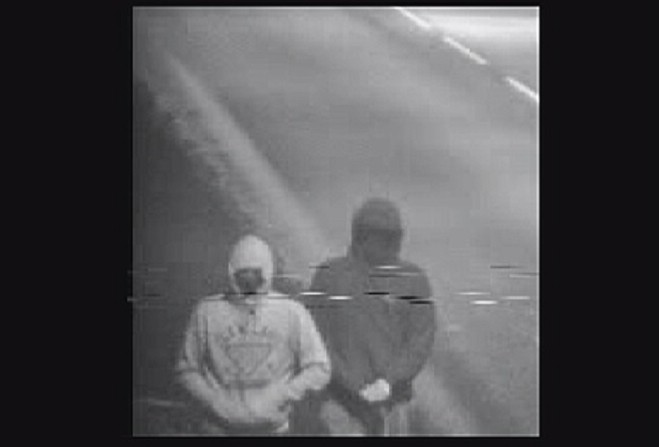 Man arrested in connection with incident

A man has been arrested in connection with an attempted robbery at Strang Stores last month.

Two men went into the shop on November 2.

One of them was carrying a knife and threatened the shop assistant, before the pair ran off.

An image and CCTV footage relating to the incident have been released.

Police are asking people to look at the image and ask themselves whether they recognise those in it, or the clothing worn.

They say the hoodie worn by the man on the left of the still image appears to a have distinctive pattern on the chest.

If you saw someone wearing this clothing on or around November 2, or know of its whereabouts you're asked to call the police on 631212.

Following the arrest of a local man in connection with the attempted Robbery at Strang Stores, Ballaoates Road, Strang the Police are now releasing a short clip of CCTV footage from within the shop showing the actions of the two males involved. To remind people the incident occurred at approximately at 5.30pm on Monday 2nd November 2015 where two males entered the shop, one of them was carrying a knife and made several threats to the shop assistant whilst pointing the knife at her before making off from the area.The males involved have made efforts to conceal their identity by wearing hoods up with masks covering their faces. At the time the shop assistant was alone and who clearly has been subjected to a harrowing ordeal having been confronted by this male brandishing a knife towards her whilst making demands for cash.At the same time we are also releasing a still image of the two males believed to be the same males involved in the attempt Robbery. Police are asking members of the public to look at the image (separate post) and ask themselves whether they recognise the people or the clothing worn, in particular the hooded jumper worn by the male on the left, this appears to have distinctive pattern on the chest. If you have seen someone wearing this clothing on or around the 2nd November 2015 or know of its whereabouts then please contact the Police. Detective Constable Emily Butler said “Whilst this offence was some four weeks ago enquiries are continuing and we would like to reassure local businesses and residents that such offences are taken seriously and urged anyone with information to get in touch directly with the Police or by contacting the free phone Crime stoppers hotline on 0800 555 111.