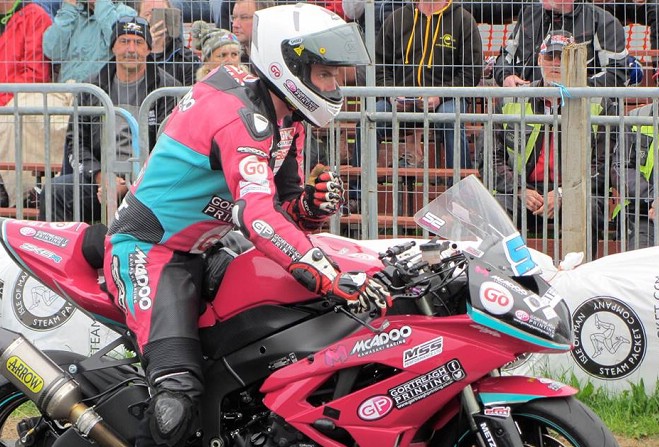 Wiring fault found to have caused Southern 100 crash, but no blame attributed

A verdict of accidental death has been recorded at the inquest into the death of road racer James Cowton.

A broken connection between two wires linked to the kill switch on his Kawasaki was found to have caused the crash at Stadium Bends during last year's Southern 100 600cc Challenge Race.

The fault meant his machine lost power heading into the corner, causing the 26-year-old to clip the wall and be thrown onto the other side of the road, resulting in multiple injuries.

Cowton was running in second place when the incident occurred, with the three riders immediately behind him also caught up.

Ivan Lintin crashed trying to avoid the stricken rider, while Jamie Coward hit the damaged barrier, and Michael Evans was unable to avoid running into Cowton before coming off his own bike.

Dr Paul Hancock, who volunteers with the Manx Road Racing Medical Services, tended to the injured riders and ordered the air ambulance to take Lintin to hospital, before accompanying Cowton into a road ambulance. However, he was pronounced dead before the ambulance left the Billown Circuit.

Footage from Greenlight Television's stationary camera and onboard footage from Cowton's machine was shown in court. When police examined the video footage, the sound of Cowton's engine cutting out could be heard.

Vehicle examiner Anthony Bode examined all four bikes involved in the incident, and initially found no mechanical issues with any of the machines. However the sound on the footage led Mr Bode to look into the electronics behind the instrument cluster at the front of the bike, where he found a loose multi plug, which connected the kill switch.

Further testing suggested a clip that fastens the two halves of the plug together hadn't been locked in place, resulting in the connection coming apart. Mr Bode believes the fault may have existed some time, but went undetected as this part of the bike isn't checked by scrutineers or during regular servicing.

Kawasaki UK provided a statement that the manufacturer had never come across a case of connectors coming loose on its machines before, although the connectors had at some point been modified for racing.

While delivering her verdict, Mrs Hughes was very clear that no blame could be attributed to anyone involved in preparing or checking the bike ahead of the race, as this simply isn't a part of the machine that's examined regularly.

She said it was impossible to tell when the instrument cluster was last removed, but that there was no malicious intent or lack of care leading to this incident. Evidence from Mr Cowton's mechanic, scrutineers and the firm that carried out maintenance work on the bike ahead of the meeting showed it was well-prepared and in good mechanical order ahead of the race, and that no faults had been detected earlier in the week.

She concluded by adding those who take part in road racing are aware of the risk, and that one of those risks is something going wrong with the bike. She extended her condolences to Mr Cowton's friends and family, some of whom were present for today's proceedings.