All set for winner-takes-all showdown 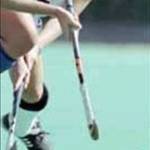 The race for the WI-Manx Mixed Premier League is going down to the wire.

Bacchas A and reigning champions Valkyrs A will clash in the final game of the season next Saturday with the title up for grabs.

Bacchas remain a point clear at the summit after a 6-2 victory over Vikings A.

A hat-trick from Jamie Brown and one apiece from Kim Carney, Andy Whiting and Sharon Pope set up the end-of-season showdown.

Katie Errock scored one in each half for Vikings.

Valkyrs A are right on their heels and need to win next weekend to retain the title.

They warmed up in style with a 7-2 romp against Bacchas B.

Alex Bell and Steph Foxton replied for Bacchas B.

The race to avoid the drop is also on a knife edge after bottom club Vikings B won their second successive match.

Ieuan Williams and Dave Millward netted in a 2-0 win over Celts to move within a point of their opponents.

They are also within a point of Valkyrs B who were leapfrogged by Ramsey A.

Matt Robertson scored the only goal of the game.

Any of the bottom four could be relegated.

In Division Two, Ramsey Ravens clinched the championship with a 2-1 victory over Southerners.