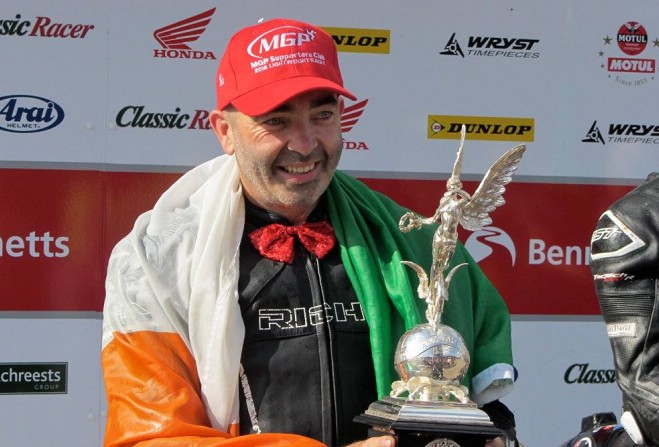 It's his 10th anniversary of riding on Irish and Manx roads

At the start of the race there were just tenths of seconds between top 5 racers but James Chawke took an early and very narrow lead.

He extended the lead by Ramsey Hairpin to 2 seconds ahead of Andrew Farrell, with Gary Vines behind by 2 seconds in 3rd.

But at the bungalow there just a 0.5 second gap between Chawke and Farrell, and Farrell was able to take the lead by the end of the first lap.

For the second run around the course the top 3 Farrell, Chawke and Vines were incredibly close, and it appeared to be anyone's race.

But by the end of the second circuit as racers headed to the pits, Vines retired from the race moving David Lumsden into 3rd.

And a cautious pit stop from Chawke meant his place in 2nd appeared much more permanent going into the 3rd and final lap.

Chawke closed the gap on his final run around the TT Mountain Course, but it wasn't enough to take a 2nd win in today's racing, after claiming the Junior MGP title earlier in the afternoon.

The final result was Andrew Farrell on the top of the podium, with James Chawke in second place and David Lumsden in third.

It's Farrell's 10th anniversary of riding on Irish and Manx roads.