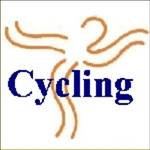 Baxter, who will represent the Isle of Man at the Island Games in Rhodes, broke clear of the bunch to join early breakaway rider Aaron Livesy. They soon built up a lead, and Baxter became the Senior Champion.

Tom Black broke clear at the end to claim the Junior title, in third overall.

Chris Whorrall was fourth, and is Juvenile Champion.

Peter Gage is the Veteran Champion in 9th overall.

Natalie Arrowsmith won the women's championship and Adam Johnson won the B race.