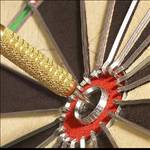 The increasingly popular Billy Moughtin Darts Cup takes place at its traditional venue of the Manor Hotel in Willaston this Saturday.

This is the sixth one, and is held in memory of Billy, a talented darts player, footballer and musician, who was killed in a road accident in August 2005 at the age of 24.

A good friend of Billy's, Rob Corrin, organises the event.

Ed Oldham suggested to him it's become quite a tournament these days: