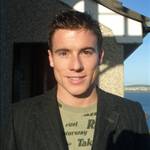 A strong start into fourth place from fifth on the grid gave the British contender a great launch pad.

The Tech 3 Yamaha rider quickly moved into third when Dani Pedrosa ran wide into the first turn and into the gravel.

Toseland worked hard to maintain his place, including hard-fought battles with the factory Yamahas of World Champion Valentino Rossi and Jorge Lorenzo.

The spectacular racing even saw him pass eight-times world champion Rossi on two separate occasions as the Ramsey resident refused to give up the fight for a maiden podium finish.

After finally giving way to Rossi, Toseland continued to fight hard to maintain fourth place, but his challenge faded as his tyres did and he was eventually passed by Andrea Dovizioso and Shinya Nakano.

"I'm feeling great after that race," said Toseland who was celebrating his 28th birthday.

"That's the most comfortable I've felt at a circuit and on the bike for a long time because I've ridden here before and we tested here pre-season.

"For the first time in my career I passed multiple champion Valentino Rossi twice, so that's something to be proud of. I tried really hard to stay with him because that was the podium position."