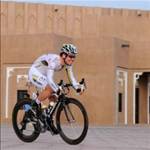 Isle of Man cycling star Mark Cavendish was involved in a break which stayed away on Stage 3 of the Tour of Qatar.

He was helping his team-mate Mark Renshaw as crosswinds and a constantly high pace scattered the field.

Overall leader Tom Boonen punctured just as the race split, so those in the break then worked hard for team-mates who were towards the top in the general classification.

The 150km stage was eventually won by Heinrich Hausler of Garmin-Cervelo, his second victory in a row.

Hausler beat Renshaw to the line in the sprint finish to take over the overall lead in the event, four seconds ahead of Renshaw.

Cav was involved throughout in keeping the pace up at the front to make sure the peleton stayed out of touch, but dropped away in the final few kilometres with his job done.