Cav holds onto green jersey - but only just 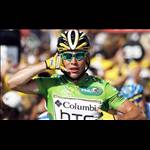 The 'God of Thunder' Thor Hushovd struck on the rain-soaked streets of Barcelona today (Thursday) but Mark Cavendish did just enough to cling onto the Tour de France's green jersey.

The big Norwegian sprinter has been Cav's closest rival for the jersey over the first few days of Le Tour and all but wiped out the Manxman's 26 point advantage from the start of the day as he won stage six.

For a long time it looked like David Millar would take it after the British rider made a break from a three-man leading group in the final 10km and maintained it into the Catalan capital.

But he was swallowed-up by the peloton with just 1km to go and Hushovd powered through to take the win.

Cavendish finished 16th, giving him 10 points to Hushovd's 35 and leaving him just one ahead as the riders head for the big climbs of the Pyrenees tomorrow (Friday) on the 224km stage seven from Barcelona to Andorra.