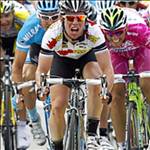 Mark Cavendish has become the first British rider to win two stages at the Giro d'Italia after taking the honours in a sprint finish on day 13.

The Laxey rider has been quick to gain revenge on Bennati, after losing out to the Italian in a photo-finish in a fiercely-contested sprint at the end of yesterday's stage.

He's only the third British cyclist, along with Robert Millar in 1987 and Vic Denson in 1966, to win any stage of the Giro.