Cavendish blows opposition away in Italy 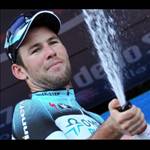 Mark Cavendish has taken his third victory at this year's Giro d'Italia and the 100th success of his professional career.

He simply blew the opposition away at the end of a very wet Stage 12 after a perfect lead-out from Omega Pharma/Quickstep team-mate Gert Steegmans.

His latest triumph in Treviso means Cavendish has now won 13 times at the Giro since his first appearance at the event in 2008.

Cav celebrated his landmark victory by sporting a t-shirt with a large 100 on it as he took to the podium.

He paid tribute to his team in a post race interview.

"They were incredible! We left it right to end. We were a minute down with 10km to go, and it was a hard circuit in the rain. It was left to my men. Julian Vermote pulled and pulled until his legs couldn't go any more and then with 2.5km to go Matteo Trentin took over and he rode and rode and rode. Gert Steegmans could have gone and left me in no mans land but he didn't and I was able to go. It's my 100th win. What a beautiful way to do it with my team."