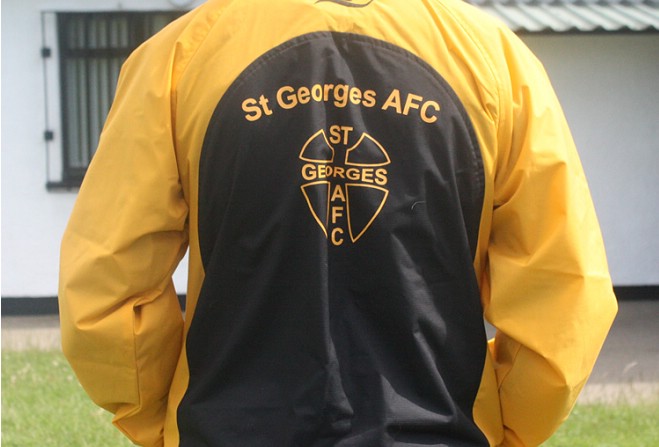 If anyone doubted the credentials of the reigning champions then think again!

That’s after St George’s demolished Douglas Athletic to move to a familiar position - the summit of the Canada Life Premier League.

Prolific marksmen Ciaran McNulty and Furo Davies each hit four in a 14-0 romp.

Skipper Frank Jones and young winger Joey Morling both added doubles and there was a regular goal from Callum Morrissey, plus an own goal, as St George’s made it three wins out of three.

Last season’s runners-up have also maintained their 100 per cent record.

Both sides put their unbeaten records on the line in an end-to-end contest at Glen Road.

But it was Gerrard’s deflected strike which settled the match 11 minutes from time.

A Shaun Kelly goal midway through the second half ensured Peel were 2-1 winners at the Bowl.

Battling St Mary’s had earlier cancelled out Lee Gale’s opener through young Sammy Gelling but the Saints were narrowly beaten.

Newly promoted Braddan made it two wins inside four days with a 4-2 triumph at Ramsey.

All the goals were scored in the first half at Ballacloan as Conor Dempsey, Chris Walsh, Stuart Pacey and Chris Craine found the net.

Gary Hepburn and Dom Parish replied for Ramsey but they slipped to a disappointing home defeat.

The other promoted team, Douglas Royal, claimed their first point of the season with a 1-1 home draw against Colby.

Ross McWhinnie equalised after the break against the southerners as they also secured their first point of the campaign.