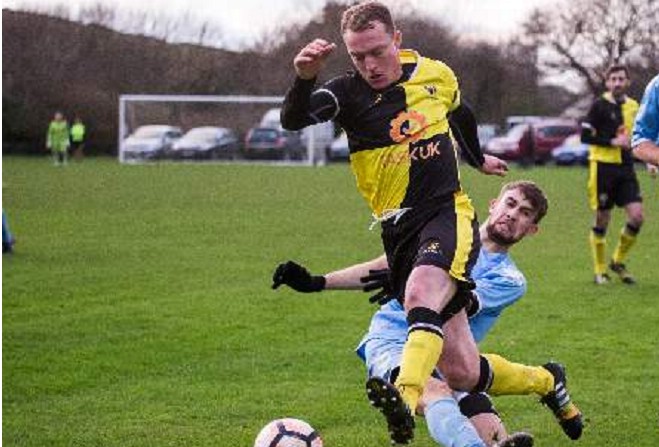 Chris Bass on the attack but St George's went down 4-0 at Rushen (Photo: Gary Weightman)

St George’s suffered their first defeat of the season in the Canada Life Premier League on Saturday.

They were thumped 4-0 at Rushen United to endure a rare hammering.

Josh Kelly opened the scoring just before half-time with a fine long-range finish and Mike Williams, Tom Doherty and a Sean Quaye own goal completed a memorable day for the southsiders.

The champions remain in the box seat, despite dropping to third place in the table.

Corinthians are top but they had to settle for a point after being pegged back by St Mary’s at the Bowl.

The leaders seemed to be cruising to victory after first half goals from Dan Simpson, Ryan Burns and Sean Doyle.

But the Saints hit back with a James Murphy double and a late equaliser from new signing John Haggerdon, on his debut, capping a six goal thriller.

Peel are up to second after going on the rampage at Douglas Athletic.

Two goals inside the first seven minutes set them on their way to a 10-3 romp at Springfield Road.

The in-form Lee Gale scored four and was joined on the scoresheet by Billy Kennaugh (two) and Shaun Kelly (two).

Daniel Bell and Johnny Shields netted the others for the westerners.

William Penhallurick (two) and Daniel Pennington scored on what was a day to forget for the hosts.

Douglas Royal are off the bottom after they clinched their first victory of the campaign.

A 3-1 success at home to Braddan gave them a massive boost.

They are now just two points behind Colby who were beaten 3-0 at Laxey.

After their victory over St Mary’s last weekend, it was a return back down to earth for the southerners as they went down to goals from young talent Stan Manning (two) and Sean Gavin.