Champs hit six of the best in season opener 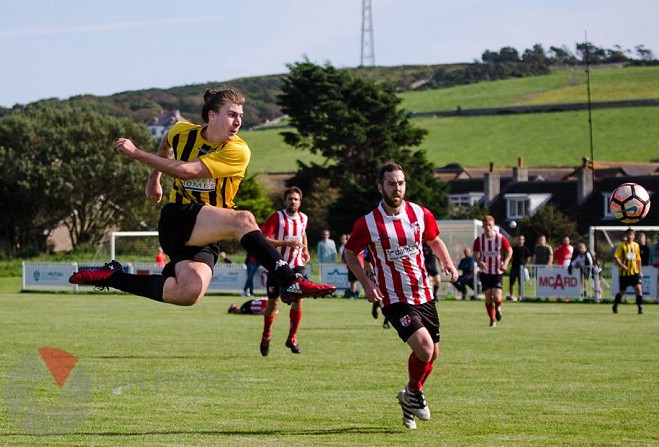 Two familiar marksmen started the season on fire in the Canada Life Premier League on Saturday.

Furo Davies and Steven Priestnal both hit four to fire their respective clubs to victory.

Davies was the star man as reigning champions St George’s made a winning start to their title defence by hitting St John’s for six at Mullen-e-Cloie.

Rhys Oates and Andrew Chadwick had fired Rick Holden’s new side in front early on to threaten an opening day upset.

But you can’t keep a team of the calibre of St George’s down for long.

They showed their class with a quick-fire Davies hat-trick and a Ciaran McNulty goal ensuring they went in at the interval 4-2 in front.

A further goal for Davies and skipper Frank Jones added to the scoreline in the second half.

The contest was close at the break with the Saints, who also found the net through Blagoy Smilyanov, leading 2-1 after Martin Moore was on target for the southerners.

But a comprehensive second half showing meant Brian Carney made a winning start on his return as St Mary’s boss.

The match of the day went the way of Rushen as they edged out Peel 3-2 in the old firm clash at Croit Lowey.

Peel had early chances but couldn’t convert and Stephen Riding made them pay with the opener.

Josh Thomas doubled that lead four minutes after the break but a double from Daniel Bell brought Peel back into the equation.

However, Mike Williams finished from a tight angle to grab a winner and spark Rushen celebration.

But the Miners had too much firepower of their own with Michael Fernandez (two), Sean Gavin, young talent Joe Walters, Dar Plemza and Jake Garvey sealing a 6-3 success at Glen Road.

The other promoted side Douglas Royal also suffered a baptism of fire on the opening day.

Dominic Parish (two) and Nick White were on target as Ramsey won 4-1 at Ballafletcher.

Royal, who replied through Gavin Gawne, had Chris Anderson sent-off late on.