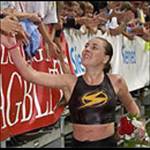 Chief Minister Allan Bell has congratulated Jessica Draskau Petersson on finishing in the top half of the field in the women’s Olympic marathon yesterday.

Jessica, who has a dual Danish and Manx background, competed for Denmark at London 2012, coming 40th out of the 107 athletes who finished the race.

She produced a strong run to achieve a personal best of 2:31:43, just eight minutes behind the winner.

An accomplished distance runner and triathlete, she spent her early years in the Island and is a former winner of the Isle of Man Sportswoman of the Year award.

The chief minister said: ‘As well as supporting our Olympic cyclists, many people in the Isle of Man will have been following Jessica’s progress with great interest.

"She has represented the Isle of Man with distinction in the past, winning gold at the Island Games, and has family and friends here.

"Competing at the Olympics is the pinnacle of any athlete’s career and Jessica has certainly risen to the occasion with a fine performance."