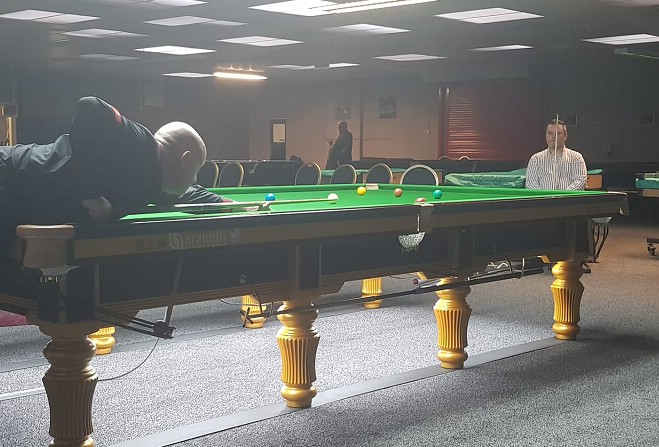 There were plenty of close frames in week seven of the Macs Builders Merchants snooker league, ten of the thirty frames played going down to the black.

Reprobates halted the Musicians run of big wins with Nicola Young bouncing back from a season’s absence with a 21 break to win 93-69 against Peter Collister. The next two frames were pretty one-sided and shared, Michael Lowe 22-76 Mike Doherty (22 break) and Brendan Clague 75-19 Brian Howland. John Kennish had a 26 and 22 in the next but could not haul in Paul Tangeman who won out 95-80 and assure a home win. Rob Callister went down on a re-spotted black in the finale, 55-62 to Matt Dodd.

The Wannabes duly equalled last season’s tally of wins with this fourth victory. Steve Cowin 76-72 Dave Pickersgill and Paul McKinstry 69-59 Phil Joynes put them two up, where both went to the black. Fred Corris didn’t allow Shaun Roberts to repeat any of last week’s heroics as Corris took it 81-26. The last two frames were shared, James Teare 59-74 Terry Boyle and Dave Corris 80-40 Mike Boyle. No win for PSM since 4 March, can they register one home to Newbys next week as they did last season?

Handicap cuts for Marek Kenny and John Spellman didn’t stop the Rockets notching a fifth win. Kenny had a 23 break in a 63-26 win over Brandon Forrester and then Graham Ashton 56-25 Scott Campion put them 2-0 up. Ashton potted some good balls and Campion, like most of the Cue Zone team struggled to find their potting form on the tricky Finch Hill tables. Ken Kinrade made a rare appearance for the Rockets due to “Rocket” Ron Grogan being unavailable with an injured neck and no snooker glasses. It must have looked that Sam Palmer would have an easy game? Despite this, it was Kinrade who somehow conjured up a tidy 25 break to take the early lead but Palmer dug in playing some very good safety and potting key balls which meant that he only had to pot the pink to take the frame 42-55 and bring the match score 2-1 to the Rockets. John Spellman didn’t quite repeat the excellent form he had shown in the Champion of Champions last weekend but he was too strong for Josh Rigg who was also struggling to find any potting form as the frame ended 64-42 to secure a home win. Doug Kinrade was drawn last for the Rockets and with a 28 point advantage on Ivan McMaw was able to keep ahead until the very late stages, although both players missed several opportunities to clinch the frame it went down to the final ball with McMaw eventually potting an easy black to take the frame 62-64. Thanks to Ken Kinrade.

Malew slipped up again but had two black ball frames gone the other way they would have returned south with a 4-1 win against the champions. Ciaran McNulty returned after a long absence and had a hard fought win against James Goodwin on the black, 59-52. Johnny Myers doubled the lead, playing well to overcome Eric Drinkwater’s 42 start and inflict his first loss 78-42. It was a slow start to the third frame between Steve McDonald and Alec Oates with the score 5-4 after nine reds! It did pick up after that with McDonald taking it on the black 53-46. David Quayle pulled one back despite his cut handicap 47-67 over Adam Dooley. Mark Quinn got another for Malew in the last cutting back my correspondent Simon Gardner’s start, laying some good snookers along the way for a pink ball win 49-63.

Hurricanes gained revenge for two league defeats to Peel last season. Jamie Wilson with three teen breaks prevailed in the opener despite an early flurry of fluked pots from Don Humphries, with the concession coming after the blue was potted, Humphries 50-73 Wilson. A good battle followed between Mike Crook and Stuart Littlewood, this went all the way and after a lengthy exchange of safeties, it was an under hit shot from Crook that left the black on to the middle bag for Littlewood to roll in and stay unbeaten, Crook 50-55 Littlewood. Jim Caley had a bit of a task in the next with a confident Paul Smith, fresh from his Champion of Champions exploits. Smith scored consistently and finished off with a 23 break, Caley 57-87 Smith. Peel’s John Kelly also looked to be heading for defeat to Chris Dagnall who had a 24 break. But after a good fight and comeback on the colours from Kelly, a bewildered Dagnall somehow followed in a hanging final pink from twelve feet that wasn't straight! Kelly potted the re-spotted pink nicely from the D and had the black just inches from a corner bag to follow, Kelly 80-70 Dagnall. The final frame was pretty forgettable between Geoff Hall and Steve Munk, with pink and black going safe. Munk pulled away with the final reds but Hall hung in and could still tie with pink and black. Munk then produced a schoolboy error and went directly in off the pink when attempting a pot. With the pink in baulk just near the D, the oblivious Hall, (it was getting late) potted the easy pink from where the referee had placed the cueball, which wasn't at the best of angles to gain optimum position on the black. Hall regardless, knocked in a very nice long black to make the overall scoreline respectable, Hall 67-61 Munk.

St Olaves A made it six wins from seven as Paul Smyth reports. Sean Corkish 64-110 Lee Gale, Corkish giving away 56 started well, but every time he got closer Gale found his eye and had a few good pots of his own. Eventually Sean needed snookers and it was all over. Paul Smyth 82-40 Dave Cavanagh, Smyth giving away 28, buoyed up with home form and last week’s defeat playing on his mind came out potting and didn't stop. With breaks of 23, 30 (the highest of week 7) and missing the black for another 20 odd. The match was over quickly as he continued to pot everything off the lampshades! Dave Kelly 59-51 Kam Virk was a scratch match with Kelly starting the more confident, but Virk had his eye in also, stringing a few pots together to keep it close. Both had a chance on the final black but Virk left Kelly a cut, which he tucked away. James Kerr 79-46 Tony Dhadwal, Kerr giving away 28 started strong. He had a 22 break plus a couple of teen breaks to pull away. Restricting his opponent to only a handful of pots, Kerr dominated for a strong win. Darrell Thacker 105-29 Paul Kell, Thacker giving away 28, wasn't phased and just played a strong match. Using his cue power he made a nice 22 break, accumulating over a century in points while his opponent only potted a single red.

Malew on 25 points have their lead cut by another two points, St Olaves A are second on 22 and Hurricanes third with 20. Next week Malew have a home tie against lowly Peel whilst St Olaves have a bye. Hurricanes take on CZ Reprobates. Stu Littlewood stays top of the individual league, unbeaten on 7 wins, John Spellman, Jamie Wilson, Dave Corris, Darrell Thacker and Mark Quinn all on 6. Addinall heads the breaks league from John Kennish and Sean Corkish.