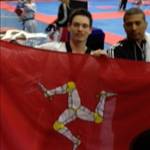 The Isle of Man Taekwondo Association is celebrating a major success at the Swedish A-class open at the weekend.
Aaron Cook took gold in the under-80kg category at the event held in Trelleborg .

The competition, which is the largest A-class event in Europe, hosted teams from all over the continent and as far a field as Thailand.

The pressure was on Aaron, who had not fought in competition since becoming European Champion in May 2012.

His second fight was at 3-3 until Aaron stepped up several gears in the last few minutes to win 10-3.

He comfortably beat Armin Gredic of Bosnia and Herzegovina 15- 3 to take gold in the final .

Aaron will be competing next in the US Open later this month.

The teams youngest member, eight-year-old CJ Lawlor, produced an amazing performance in his first European A-class event against a fighter from Bulgaria scoring a number of two-point jumping back kicks .

He took the bronze medal overall.

Manx cadet Lee Mackey (12) struggled to get his distancing correct and despite dominating his match gave away too many penalties by kicking low.

Lee learnt a lot from his loss and knows what to work on for his next fight.