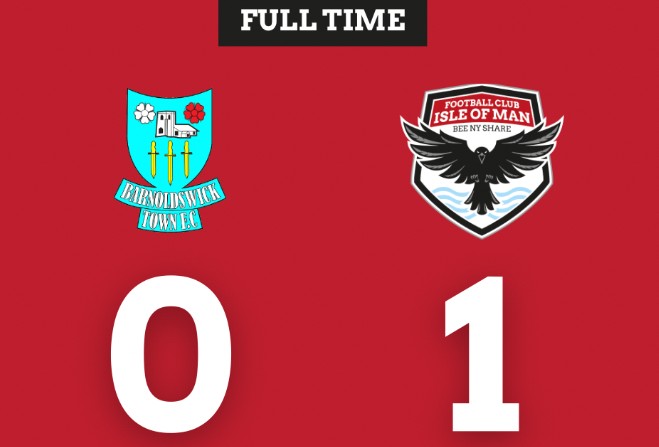 Ravens dig deep to hold on for three points in Lancashire

Young striker Tom Creer's close-range finish was enough to see FC Isle of Man battle to an important 1-0 win at Barnoldswick town in the NWCFL Premier Division this afternoon (3 December).

Ravens striker Luke Murray hit the crossbar in a tightly-contested but goalless first half at the Silentnight Stadium.

Creer then steered home a Charlie Higgins cross from close-range to put the Ravens in front shortly early in the second half.

The result means FC Isle of Man go eleven points clear of the relegation zone with their second victory in a row.

The Ravens carved open the first clear-cut chance ten minutes in when Luke Murray met a long-range free-kick only to see his header crash off the crossbar.

But the hosts then began to grow into the first half, showing a particular threat from set pieces.

In the 28th minute, FC Isle of Man had defender, Alex Maitland, to thank as he cleared a Barnoldswick Town effort off the goal line.

After a goalless score-line at the break, the Ravens then took the lead just over five minutes into the second period.

A low cross from Charlie Higgins across the Barnoldswick Town six-yard area found young striker, Tom Creer, who was able to poke home from close range.

Barnoldswick Town upped their tempo in response to push for an equaliser, hammering the Manx side's defence into the closing stages.

The Lancashire side did have the ball in the back of the net in the first minute of second-half stoppage time, however it was quickly ruled out for offside.

But the Island outfit were able to hold on through the four minutes of additional time to claim the three points, to take them eleven points clear of the relegation zone.

FC Isle of Man's next match will be at home against Litherland REMYCA on Saturday, 10 December, kicking-off at 6pm.