Cricket: Hartmann and Barnett shine in latest Super 2s round 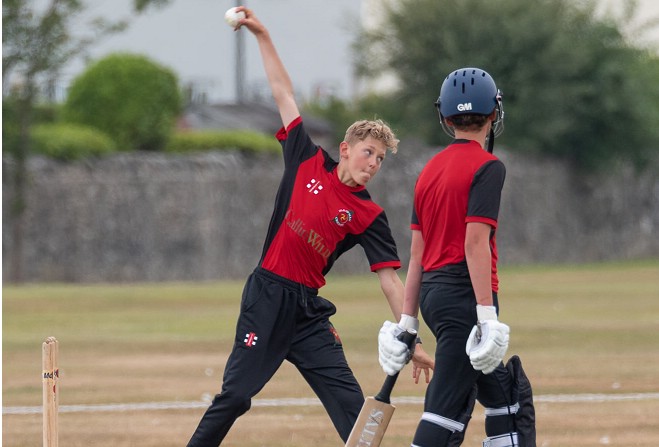 Sunday saw another round of Super 2s fixtures played in glorious weather at King William's College.

The main square saw an U13 XI play an U15 XI with Captain Thomas Ackron winning the toss and choosing to bat. After two early wickets to Sam Perry and Lucas Stennett a 63 partnership between Jared Shepherd and Thomas Ackron was moving the U13s towards a competitive total. However, the loss of Jared for 38 and Thomas for 22 saw wickets fall and they finally finished on 107 for 6. Wickets were taken by Elliott Butler 3-22, Sam Perry 2-22 and Lucas Stennett 1-17. In reply an excellent 50 not out from 39 balls by Henry Telford held the innings together and saw the U15s go past the U13s in 17.4 overs for 6 wickets. Will Wiseman picking up 2-27, Ryder Spencer 2-14 and Joel Williams 1-8.

The women started well with an opening partnership of 70 between Lucy Barnett and Caitlin Henery. Lucy making 39 and Caitlin 35. Wickets then began to tumble in the middle overs but a sixth wicket partnership of 44 between Catherine Perry (22 not out) and Jo Hicks (14 not out) helped the women to finish on 161 for 6. The wickets were taken by Will Osbourn 2-18, Adi Malikireddy 2-28 and Samson Curtis 1-34. In reply the Junior Manannans kept on chipping away at the score with Sam Burrows (18), JJ Griffin (25), Juan Domingo (26) and Dylan Howard (14) but with no one going on the make a big score they finally finished on 134 for 7. Jo Hicks 2-30, Catherine Perry 2-30, Lucy Barnett 2-9 and Lottie Stennett 1-27.

The main square saw an U17/National XI play with Chris Langford winning the toss and choosing to field. An outstanding opening partnership of 179 between Carl Hartmann and Sam Barnett saw shots played all round the ground. Carl was first out for an superb 89 off 53 balls including 18 fours and Sam an excellent 69 off 52 balls including 8 fours and 1 six. Team A finished on 208 for 4. Nathan Williams finishing with 2 wickets and Chris Langford and Matty Young one each. In response Team B continued to go after the score with a number of excellent shots but were eventually 128 all out with Adam McAuley top scoring with 34. The pick of the bowlers was Joe Burrows with 4-24 and Matt Ansell picking up 2 wickets and Dollin Jansen, Jacob Butler and Fraser Clarke one each.