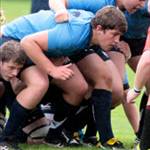 It's the latest step in the development of the 18-year-old, who is supported by the Isle of Man Sports Institute.

He was invited to be a full-time Rugby Development Player at the Edinburgh Rugby Academy in August.

He is also a first-team player for Edinburgh club Stewarts Melville, competing in the Scottish National League First Division, and was involved in their 35-17 victory over Kelso on Saturday.