Crosby through to Tinker Cup semis 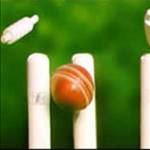 The Millers were dismissed for 80 with Jodie James hitting 25 and Eddie Clague 13, while Dave Picken took three wickets for four runs.

Following his century on Saturday, Simon Watson was again in tremendous form, smashing 48 not out as Crosby reached their target for the loss of only one wicket.

They now travel north to meet cup holders Ramsey in the semi-finals.

In the other semi St John’s have been drawn at home to Castletown.