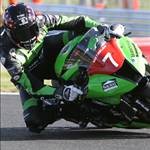 Conor Cummins' comeback from serious injury continued at the weekend with a solid 23rd place at round two of the Metzeler National 1000cc Superstock Championship at Oulton Park.

The Blackhorse Kawasaki rider declared himself happy with the progress made around the undulating Cheshire circuit in yesterday's 15-lap race.

Speaking later, Conor said: "As I've said all along I'm not looking at the results, I'm just concentrating on putting the laps in and this weekend has been another very good workout with good progress made."

Conor will be back on his Blackhorse Kawasaki at Croft in two weeks time for round three of the championship.