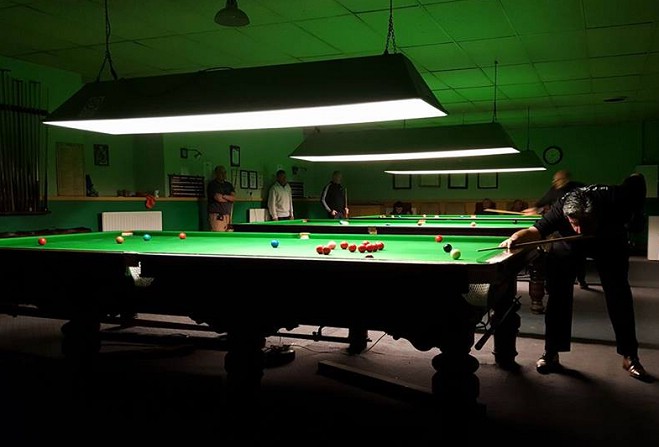 It was east versus west at St Olaves in Ramsey as the 'Hurricanes' boys faced off against Mike Crook, Geoff Hall and Don Humphries from Peel Legion.

Dagnall, Stanton and Kermode were arguably the form trio going into the final, having thrashed Dollin Mercer, Calum Gardner and Nicola Young in the semis.

Matches in this competition are decided by aggregate points scores, and a magnificent break of 67 from Dagnall against Mercer all but sealed his team's place in the final.

He certainly continued that momentum, drawn to play Mike Crook over two frames - a neat break of 29 proving important in the first frame, which finished 81-37, before Dagnall pieced together a 65-42 win in their second.

Having beaten Nicola Young by more than 50 points in the semi-finals, Graham Stanton also looked in good nick.

His first frame against Peel's Geoff Hall was a tight one, with Hall potting the final black to win by a single point, 48-47 - but Stanton fought back well in their second frame, a break of 22 helping him on his way to a 47-24 win this time, heaping more points in his team's favour.

In the penultimate frame, Nigel Kermode all but sealed the victory for the 'Hurricanes' with a resounding 89-36 win against Don Humphries, who was noticeably suffering from a lot of bad luck according to the match report.

This left Humphries with a near-insurmountable deficit of 157 points to climb going into the final frame, and despite starting strongly, he found himself 145 points behind with only 22 on the table after some consistent potting from Kermode.

Humphries inevitably offered his hand of resignation and the 'Hurricanes' took frame and match - 2017/18 Threesomes Champions!