On Air Daybreak George Ferguson | 6:00am - 9:30am
Billie Myers - Kiss The Rain Download 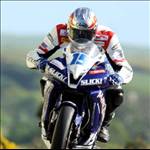 After a wet and miserable BSB weekend at Silverstone, Dan Kneen is lying in joint second place, just two points adrift in the British Supersport Cup Championship with one round to go.

"I was lucky at the start of the race," said Dan, "visibility was virtually nil with all the spray, Hutchy came off in front of me, his bike was sliding towards me and there was nowhere to go when Pat McDougall on my left hit Hutchy's bike, I was really lucky to get through!"

"To be honest after the restart, I could hardly see anything and I was just glad to get some points and get the day finished safely and move on to the next round."

A test ride yesterday with DMR Racing on a BMW 1000RR superbike, run by top ex-racers Ian Duffus and Brian Morrison at Donington Park, means Dan has secured a ride for this year's Macau Grand Prix and the 23-year-old TT ace was happy with the test.

"It was good, I didn't get a lot of time on the bike, but what I did felt great and I got quicker each time I went out" said Dan.

The Macau GP is in November and there is still the British Supersport Cup Championship final round at Oulton Park in two weeks, where Dan is confident he can take the title.

"I really like Oulton, I had a bit of bad luck there at the begining of the year when I got up to sixth place in the wet and fell off, I was trying a bit too hard, too soon!"