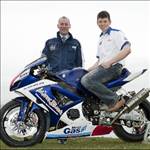 The firm has pledged £7000 to the 22-year-old from Braddan, who finished 13th in last year's Superbike TT.

The sponsorship is in conjunction with accountancy firm Marks Bloom, who will provide the bikes.

Dan was making his debut in TT 2009 after completing an historic treble in the Manx Grand Prix the previous year.

However, his race week ended when he crashed and broke his leg in the second Supersport TT race.

It's the second time Manx Gas has offered sponsorship to a young sports person in the Island, with snowboarder Zoe Gillings being awarded £5000 last year.

Dan finished fourth overall in the British National 600cc Superstock championship and is aiming for a top-ten place in TT 2010.