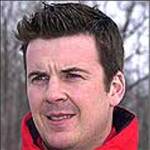 David Higgins and Ieuan Thomas have narrowly missed out on victory in the opening round of the 2009 Chinese Rally Championship, the Jiangning Rally.

The crew thrilled spectators by fighting with event winner, Jussi Valimaki from Finland, from the start, until David hit problems on Saturday.

"We finished second by 36 seconds, but we lost 45 seconds on Saturday with a problem otherwise things could have been different," said David at the finish. "We broke a rear shock absorber and lost the time over the next three rough stages. The roads on the event were quite rough with big rocks throughout."

It had been seven months since the last round of the Chinese Rally Championship in 2008.

"It was great to get back onto the stages and out with the team again," said David, "and there's not much time before the next round, we're back in three weeks for the Huairou Rally at the start of July."

Although David does not qualify for points in the overall drivers' championship, he has picked up second place points for the WY Rally Team in the teams' championship which he has helped them win in the past.

The Huairou Rally takes place from July third to fifth.