David Teece Trophy to be presented for first time 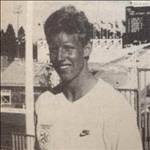 A new award in memory of one of the Island's greatest ever athletes will be given out for the first time at the Track and Field Championships at the NSC this weekend.

The David Teece Trophy For Excelllence goes to an athlete who has performed to a consistently high standard over the year, and will be presented by David's mother Carol Quirk.

David Teece was an outstanding runner who still holds the Manx 400 metres record of 48.38, which he set 20 years ago and represented the Island at the 1990 Commonwealth Games in Auckland, New Zealand.

He passed away last year at the age of 40.

On hand to see the trophy being presented will be David's family, his widow Sandrina and their children, one of whom, seven-year-old son Nathan, is competing in the championships.