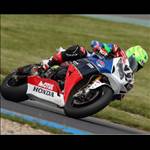 The decision is a mutual one, after Donald told team bosses that he could not commit to the full testing and race programme for 2013 as he wants to spend more time at home Down Under.

The three-man team for the endurance races will be John McGuinness, Simon Andrews and Michael Rutter.

Cameron Donald will still compete in the North West 200 and TT for Wilson Craig Honda.

The popular Aussie can be seen on television screens on Monday evenings in the ITV4 series about the TT Legends exploits last season.