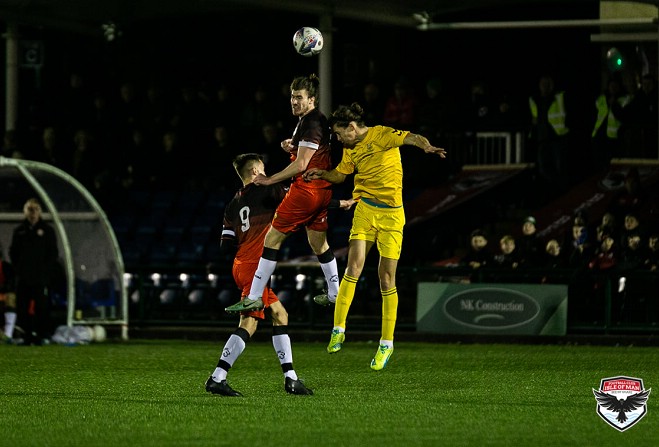 Ravens forced to put midfielder in goal during second half

Sean Doyle grabbed two goals as FC Isle of Man made it three wins in a row with a 3-0 victory over Ellesmere Rangers at The Bowl last night (15 January).

Going into the game, 16 points separated both sides in the league with the Ravens aiming to maintain their strong footing in the NWCFL Div 1 South play-off places.

In a cagey first half, eighth-placed Ellesmere Rangers enjoyed the better share of possession and rhythm but they, like the Manx side, were lacking in many clear cut opportunities.

It took marksman Doyle to break the deadlock on 18 minutes, who headed home at the near post from a Lee Gale corner from around five yards out.

The closest the visitors came to an opening in the first period was in the 38th minute, but a 30-yard effort was comfortably gathered by Ravens goalkeeper, Matthew Quirk.

The Island side went into the half time break with a 1-0 lead and started the second half with greater intensity.

Nine minutes in Ellesmere Rangers were reduced to ten men when midfielder Harvey Howell was judged to have kicked out at FC IOM’s Jack Camarda on the floor after both had gone in for a challenge.

Referee, Nigel Usher then brandished a second red card, this time to a member of the Rangers’ coaching staff on the bench after some of the visitors’ dugout contested the first decision.

But just twelve minutes after that on 66 minutes, FC IOM also saw a player sent off when goalkeeper Quirk received a straight red for clattering Ellesmere striker Jordan Davies on the edge of his penalty area.

Without a recognised ‘keeper on the bench, Ravens midfielder Michael Williams donned the No.1 jersey and gloves.

Despite the home side now having a makeshift goalkeeper, Ellesmere failed to test Williams for the rest of the half and the hosts then duly punished the Shropshire-based club up the other end.

With ten minutes remaining, Gale fizzed a low cross in from the right and Doyle tapped home his second of the game from six yards out into the roof of the net to put the Manx outfit 2-0 up.

And six minutes after that, the three points were sealed for the Ravens when substitute Dan Simpson was on the end of a through ball into the penalty area before quickly turning his man and firing a low left footed effort past Ellesmere stopper, Jack Boswell into the bottom right corner.

The 3-0 victory for FC Isle of Man means the Island team remain in fourth place in the NWCFL Div 1 South table, inside the play-off positions.

Their next game will be at The Bowl against Cheadle Town next Saturday (22 January) at 6.30pm.

Man of the Match: Michael Williams (FC Isle of Man)