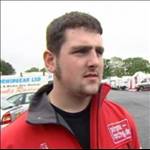 Once again the TT podium has the legendary Dunlop name topping it, after Michael - son of the late Robert and nephew of the late Joey - won today's Supersport Race Two.

He led Ramsey man Conor Cummins for much of the race, with Bruce Anstey snapping at his heels in third.

Dunlop gradually stretched his lead as the laps went by while a mechanical problem from around the end of lap three meant Cummins lost speed and with it second place to Anstey.

But he did manage to hold onto third to grab his first podium finish at the TT.

Some riders weren't happy with the wet roads though.

Ian Pattinson, Adrian Archibald and William Dunlop all pulled out at the end of the first lap because of the conditions.