On Air Night Flight | 1:00am - 6:00am
Rockers Revenge - Walking On Sunshine Download 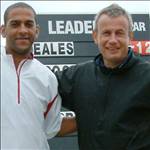 Paul Eales is relishing the challenge of defending his Manx Golf Classic title at Castletown next week (June 19-21).

The former European Tour winner, who divides his time between playing and working as a BBC television and radio pundit, said: “How can I fail to enjoy one of the most famous links in the world?

“It’s a stunning place and I’m not surprised the event has attracted such a big field.

“I’m playing well enough to hold on to my title – providing I keep off the beach at the fifth!”

The testing Road Hole has always been one to dread but there are additional hazards this year with an extra 22 strategically placed bunkers coming into play for the first time and hardened, faster greens.

Since its inception in 1981, the three-day Manx Golf Classic has been regularly listed as one of the British Isles' biggest pro-ams.

And for the first time the 116-year-old club has taken over the marketing of the event to raise its profile to a higher level and has attracted sponsorship from seven of the Island’s businesses.

Host club professional Michael Brooks, who with member John Tinsley has spearheaded the funding campaign, said: “We feel it makes more sense that the event is locally driven. We also believe it should help to publicise the Island as well as provide maximum exposure for the sponsors and at the same time offer the players a better deal.”

The event, and a £20,000 prize-fund, has drawn 45 teams of three amateurs and a professional from the region and several past and present European Tour players.

In addition to Michael Brooks, other Island professionals in the line up are: Andrew Dyson (Ramsey), Allyn Laing (Mount Murray) and Andrew Patterson (Rowany).

There are still a couple of vacancies for teams so if you'd like to find out more call Michael Brooks on 822211.


Picture: Paul Eales, right, with former Liverpool defender Phil Babb, who was one of his playing partners last year.